The UFC rolled into Calgary on Saturday night looking to make amends for the somewhat infamous UFC 149, an event considered by many to be among the worst PPV events the UFC ever held. With three fights on the main card which could easily have headlined a FOX card on their own, nobody could accuse Dana White of not trying to make amends with the good people of Calgary.

Luckily for us (and Calgary’s UFC fans), this visit was worlds apart from the last. This was an exciting card from top to bottom with plenty of action and controversy to keep fans talking until UFC 227 lands in LA next Saturday.

Let’s take a look at what could be next for Alexander Hernandez, Joanna Jedrzejczyk, Jose Aldo and Dustin Poirier following their respective victories on the main card at the Scotiabank Saddledome in Calgary.

Kicking off the main card in Calgary, Alexander Hernandez did enough to grapple his way to a hard fought unanimous decision win over “Canadian Gangster”, Olivier Aubin-Mercier. The fight was not without a little controversy with the fighters being stood up by referee Marc Goddard twice when Hernandez had only held top position for an extremely short amount of time. While frustrating, it had little impact on the outcome of the fight.

For Hernandez, the next move is a tricky one. Sitting at number 13 in the rankings the logical next step would be to match him up against someone on the edge of the top 10. Unfortunately, three of the next five fighters ranked immediately above him are not likely to be available to him. At number 12 we have Michael Chiesa who has said he isn’t returning to 155lbs. Al Iaquinta sits at number 10 but appears to be in a battle of wills with Dana White which doesn’t seem to have an obvious end point. Nate Diaz for some reason still holds the number 9 spot in the lightweight rankings (I know, I know). Any of those would have made an excellent opponent for Hernandez but he will have to work with what’s left.

Speaking to Jon Anik in the octagon after having his hand raised, the 25-year-old called for his next oppoenent to be someone ranked in the 6-10 range. Number 11 ranked James Vick (13-1-0) is set to meet number 7 ranked Justin Gaethje (18-2-0) at UFC Lincoln around four weeks from now. The winner of that contest is likely to be aiming up toward the top end of the division for their next bout but whoever loses would provide an excellent test for Hernandez.

Putting her consecutive loses to “Thug” Rose Namajunas firmly behind her, Joanna Jedrzejczyk bounced back into the win column with a relatively comfortable unanimous decision win over Tecia Torres.

The former strawweight champion never really looked to be in trouble against the number six ranked Torres, controlling the action with her formidable striking for most of the contest. The win puts Joanna back on track following the first two loses of her professional MMA career, both against reigning champ Namajunas.

Joanna Jędrzejczyk gets back in the win column, as the former strawweight queen pitches a shutout against Tecia Torres. The Pole (15-2) masterfully controlled range against "The Tiny Tornado" and punished numerous clinch attempts with expert elbows and knees. #UFCCalgary pic.twitter.com/tfBeK6p1h4

Joanna appears to only have eyes for a third bout with Rose Namajunas but that doesn’t feel like a sensible fight to make at this point. Not enough has changed for the former champion since her two consecutive defeats by “Thug Rose”. That’s not to say she shouldn’t ever get another shot at Rose, I just feel she needs to demonstrate she has evolved enough to challenge for the title again and get fans interested in seeing them fight a third time.

Part of that journey should involve facing whoever falls short when Jessica Andrade (18-6-0) faces Karolina Kowalkiewicz (12-2-0) at UFC 228. Joanna has of course fought and beaten Andrade (UFC 211) and Kowalkiewicz (UFC 205) previously, with both fighters going on to string together consecutive wins as they look to climb back to the top of the division. With Namajunas likely to defend her strawweight title against the winner, Joanna seems well placed to rematch with whoever misses out on that opportunity. A win for Jedrzejczyk would strengthen her case for a third crack at “Thug Rose” but before the UFC make that happen I have a feeling they’ll want to see her face Tatiana Suarez… 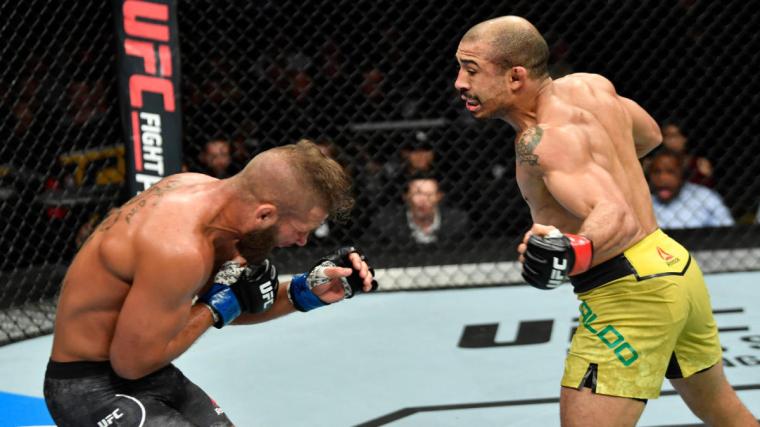 As the saying goes, “there’s life in the old dog yet” and boy did Jose Aldo demonstrate that in Calgary. The 31-year-old smashed surging contender Jeremy Stephens with a vicious liver shot before going on to finish him with ground strikes.

The win was Aldo’s first in a year, following two consecutive losses to reigning featherweight champ Max Holloway which left many wondering if his fire to compete had been extinguished. Last night, Aldo answered those questions and then some.

WHAT. A. BODY SHOT. @josealdojunior gets the TKO win over Jeremy Stephens. pic.twitter.com/Gcg4H7fUJn

While it would be understandable if Aldo felt he deserved another title shot following such a decisive victory, realistically it isn’t likely to happen in the immediate future. With featherweight champion Max Holloway on the road to recovery following his health scare in the days leading up to UFC 226 and number one contender Brian Ortega insistent on waiting for Holloway to return, there aren’t exactly an abundance of options available for Aldo.

Considering the state of the top end of the UFC featherweight division, it would make sense for Aldo to face the winner of the upcoming match up between Frankie Edgar (23-6-1) and Chan Sung Jung (14-4-0) at UFC Fight Night 139 in Denver, Colorado.

The Brazilian has of course faced both fighters before during his spell of appearing invincible earlier in his career. Aldo holds two unanimous decision wins over Frankie Edgar, first defeating “The Answer” at UFC 156 and then snatching the interim title from his grasp at UFC 200.  Between those two fights, Aldo picked up a stoppage win over Chan Sung Jung at UFC 163, finishing “The Korean Zombie” two minutes into the fourth round.

Either Edgar or Jung would make for an entertaining scrap for Aldo as he works towards retiring at the very top of the sport he dominated for so long.

In a fight that both promised and delivered violence, Dustin Poirier hurried his rivalry with Eddie Alvarez thanks to a flurry of knees and punches with just under a minute to go in the second round.

As in their first meeting, the fight wasn’t entirely without controversy. Halfway through the second round Alvarez was very much in control, in full mount with Poirier’s back pressed against the cage. After throwing a pair of 12-6 elbows (seemingly on the instructions of his corner), referee Marc Goddard stepped in, warning Alvarez for the illegal strikes before standing the fighters up, removing Alvarez from his advantageous position. Poirier immediately seized the initiative, landing huge combinations of punches and knees before Goddard stepped in to save Alvarez from taking any further damage.

All questions answered. @DustinPoirier, you are one bad dude! pic.twitter.com/NcCeodInjA

So what should be next for Poirier? If we’re considering fairness and what people deserve, then it’s a title shot – but the 2018 version of the UFC isn’t always a fair business and people don’t always get what they deserve. With that in mind I expect the promotion will throw one more, rather large obstacle in the way before Poirier can finally get an opportunity to fight for the featherweight strap.

Tony Ferguson (23-3-0) is well on his way to recovering from the injury which forced him out of his scheduled title fight against Khabib Nurmagomedov back at UFC 223. Undefeated in his last 10 appearances, “El Cucuy” will be itching to get back to work and with the UFC widely expected to announce Khabib’s first title defence against former champ Conor McGregor, he will likely have to settle for a number one contender style match up rather than the title shot he covets.

A match up with Poirier fits the bill perfectly. Rumour has it the UFC are eager to have Ferguson on the same card as the expected match up between Khabib and McGregor so presuming Poirier is able to recover from last nights exploits and Ferguson doesn’t encounter any complications in his recovery, expect this fight to be announced in the not too distant future.

One thought on “Opinion: What next for Dustin Poirier and the other UFC Calgary main card winners?”