Following last weeks announcement that UFC lightweight champion Khabib Nurmagomedov will put his title on the line at UFC 229 against Conor McGregor (perhaps the worst kept secret in UFC history), fans have been speculating what the rest of the card will look like.

The UFC have wasted little time in beginning to fill out the rest of the card and while rumours continue to circulate that the co-main event will see top five heavyweights Derrick Lewis and Alexander Volkov square off, the promotion have confirmed a number of other fights for the Las Vegas event.

Felice Herrig (14-7-0) is looking to bounce back into the win column after having her four fight win streak snapped by Karolina Kowalkiewicz in a narrow split decision loss at UFC 223. ‘The Lil Bulldog’ has built a reputation for out working her opponents and was a whisker away from elevating herself into title contention against Kowalkiewicz.

Standing in her way will be the Jackson Wink trained, former Invicta atomweight champion Michelle Waterson (15-6-0). ‘The Karate Hottie’ will be hoping to build on her win over Courtney Casey at UFC Glendale following a pair of losses to Tecia Torres and reigning champion Rose Namajunas. 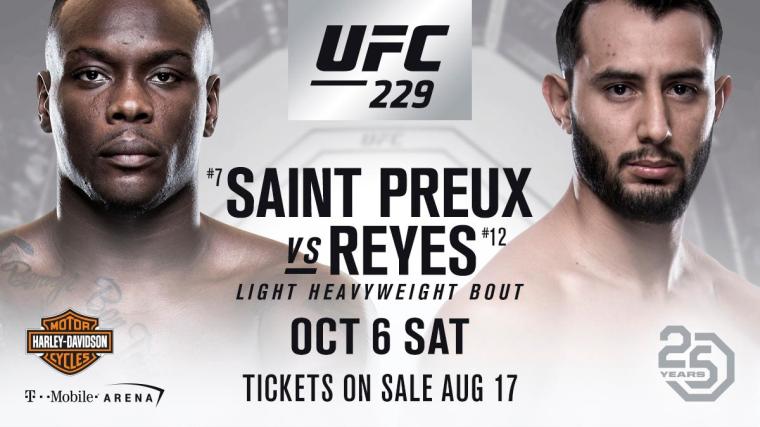 One of the most active fighters on the UFC roster, Ovince Saint Preux (23-11-0) will take his seventh fight in the last 19 months when he faces off against undefeated light heavyweight prospect Dominick Reyes (9-0-0).

‘OSP’ has won four of his last five fights and most recently put the brakes on Tyson Pedro’s quest to reach the upper echelon’s of the UFC light heavyweight division courtesy of a first round arm lock. The Haitian veteran will be making his eighteenth walk to the octagon when he squares off with Reyes, a significant experience advantage.

Reyes is only three fights into his UFC career but already finds himself sitting at number 12 in the 205lb rankings. The 28-year-old hasn’t seen the second round in his last six fights and a win over OSP would really accelerate his meteoric rise into the top half of the division.

In his last UFC appearance, Sergio Pettis (17-3-0) picked up the biggest win of his career, earning a split decision win over perennial top flyweight contender Joseph Benavidez at UFC 225. With newly minted flyweight champ Henry Cejudo fixated on stepping up to 135lbs to face TJ Dillashaw and 125lb G.O.A.T Demetrious Johnson all but guaranteed the next crack at the flyweight belt, Pettis isn’t resting on his laurels waiting for his chance as many would do (and often do, do) in his situation.

Instead, the 24-year-old will put his number two ranking on the line to take on number five ranked contender Jussier Formiga (21-5-0) in a fight which will have a significant impact on the future of the UFC flyweight division.